A stunning series of poppy displays has been assembled at St Mary’s Lymm Thousands of poppies were made by the community of Lymm. The church will be open 3 Saturdays between 10.00am and 12.00 noon on 26 October, 3 November and 17 November for members of the public to see the displays. The church is also open 10.00am to 12.00noon Monday to Wednesday every week. 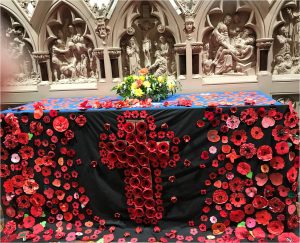 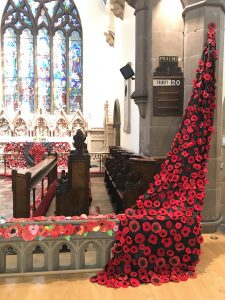 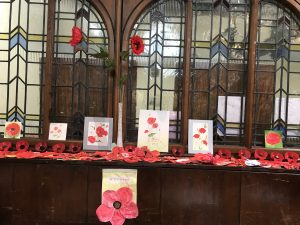 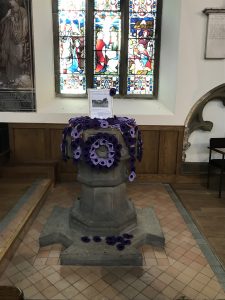 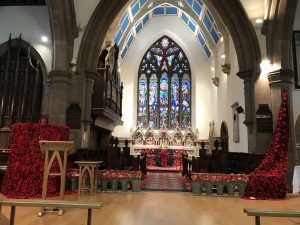 People of all ages ranging from the very young at Rosebank Nature Garden Nursery to elderly residents at Cheshire Grange Care Home Brookfield Residential and Care Home Keate House Care Home made poppies in all sorts of ways – knitted, tissue paper, plastic bottles, paper folds, cardboard, paper plates to name just a few. The main displays are by the altar, chancel and platform but there are wreaths and displays on the pillars and windows too. There is also a special display of purple poppies on the font to remember the animals that also died in the war. The church will be open between 10.00am and 12.00 noon on Saturday 26 October, Saturday 3 November and Saturday 17 November for members of the public to see the displays. The church is also open 10.00am to 12.00noon Monday to Wednesday every week

Rev Bev Jameson Rector St Mary the Virgin Lymm and Chaplain to the Royal British Legion Lymm and District Branch said “I am overwhelmed by the wonderful community of Lymm who embraced the project wholeheartedly and were enthusiastically involved in this very special way to commemorate the anniversary of World War One. I did not realise poppies could be made in so many and varied ways. The displays are just stunning. Thank you to all those who made poppies with such love and care. My thanks especially go to Sue Walton and the team at St Mary’s who spent many hours creating the spectacular displays”

Lesley Sweeney, Head teacher of Ravenbank Community Primary School said “the children at Ravenbank really enjoyed making the poppies, learning about the First World War and Rev Bev’s grandfather who was in the war. It is lovely to see their poppies displayed at St Mary’s along with so many poppies from the community”

Beverly Leigh, Keate House Care Home said “The elderly residents really enjoyed making the poppies. Some were knitted, some were made form cup cake cases, so all residents regardless of ability could make a poppy. It helped our residents focus, enjoy being a team of people and have fun. They reminisced about the past and one lady was really proud of her poppy not having made anything for a very long time. It was wonderful to be part of such a community project.”